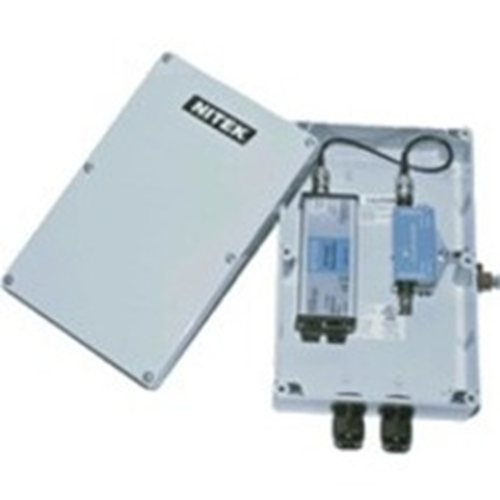 The Etherstretch™ ET1500CWS Outdoor Ethernet over Coax network extender-PoE Inserter with Surge Suppression is another of the IP Video Transmission Solutions from NITEK. The System includes a transmitter, surge suppression unit and a NEMA4X rated enclosure to house the transmitter and surge units. Operates with ER8500C or ER16500C Receiver Unit (purchase separately). Transmits IP cameras over coax and can quickly turn any ordinary RG59U coaxial cable into a high speed network communication & PoE path.

When operating over RG59U coaxial cable, the ethernet overcoax network extender system can operate for distances of up to 500 meters (1,640 feet). The ET1500CWS coax ethernet extender transmitter consists of a weatherproof enclosure which houses the transmitter and IPCOAX1 Surge Suppressor. Requires very little installation time & absolutely no set up or configuration. The The ET1500CW ethernet over coax network extender transmitter is transparent to the network and has no IP or MAC addressing. Simply connect your network devices to the network ports of the transmitter and receiver devices along with existing cabling and the system begins communicating. LED indicators show the status of network communication and PoE power.

When connected to a PoE switch, power from the switch is used as the power source for the connected ET1500CWS transmitter. In applications where network switches are not PoE capable, an optional power Inserter (IP1054 sold separately) can be used to insert power to the ET1500CWS transmitter. The power is sent from the receiver over the coax to the transmitter. The transmitter uses PoE as its power source and powers the connected PoE network device as well. The ET1500CWS coax network extender transmitter extends network communications to overcome cable distance limitations offering connections to devices in locations traditional networking does not allow.