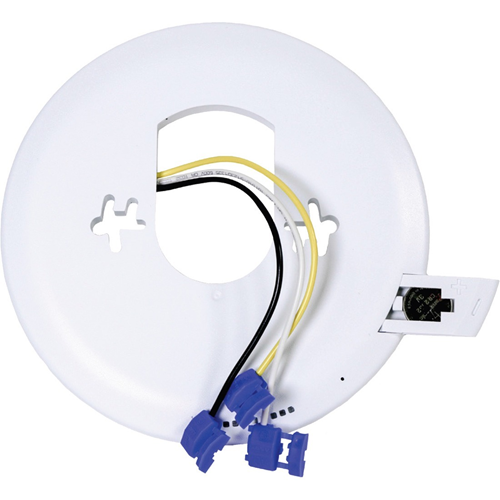 Traditional interconnected smoke detectors are designed to send audible alerts throughout the home if any one of the units detects smoke - but they are not designed to communicate the event to an alarm panel. Now, security installers can add a new layer of protection to a homeowner's existing interconnected AC-powered smoke detection system, by providing a professionally-monitored alert signal transmission when smoke is detected by any or all of the interconnected, AC-powered smoke detectors. The 2GIG 'Smoke Ring' Smoke Detector Sensor/Transmitter is the ideal solution to make homes even more safe & secure.

The 2GIG Smoke Detector Sensor/Transmitter (aka 'Smoke Ring') works in conjunction with traditional AC powered interconnected smoke detectors to communicate alerts to 2GIG (or other 345 MHz) alarm systems.
The 2GIG 'Smoke Ring' installs discreetly between the existing AC-powered smoke detector and the ceiling, providing a clean, unobtrusive solution. Utilizing the same AC line current that powers the smoke detector,
the 2GIG 'Smoke Ring' will always be 'on' and, with a 7+ day battery backup, will even operate during a power outage.