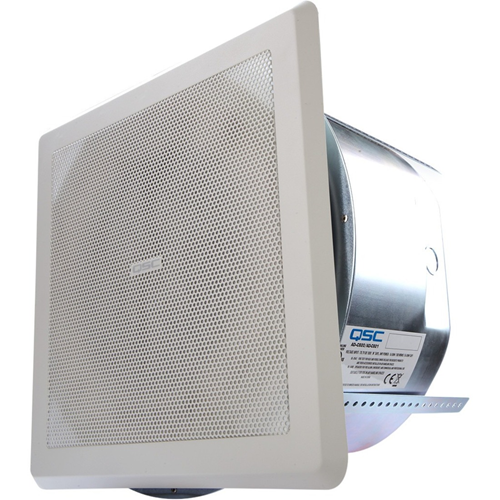 The AD-C820 and AD-C821 are acoustically identical and designed for music playback, public address and distributed audio in applications that require high output from a ceiling mounted loudspeaker. The AcousticDesignTM Series of installation loudspeakers has been designed for trouble free operation and versatility. Both models use custom designed transducers and crossover networks, in combination with an acoustically optimized enclosure (AD-C800BB), or as a fully integrated, sealed system (AD-C821). These loudspeakers continue the AD Series philosophy of bringing natural and accurate sound quality combined with versatility and reliability to high-ceiling applications.

The AD-C820 assembly includes the coentrant transducers, a 70V/100V transformer and a crossover mounted on an ABS baffle. When ordered as a system (AD-C820R SYSTEM; AD-C820S SYSTEM) the backbox (AD-C800BB) and a round or square grille are included.

The AD-821 is a fully integrated, factory sealed system using a "dog-ear" style mounting scheme. When ordered as a system (AD-C821R SYSTEM; AD-C821S SYSTEM) a set of tile rails and a c-ring are included as is a round or square grille.

The 8" woofer is equipped with a treated paper cone on a steel frame. In the optimized enclosure the usable low frequency of the system extends to 52 Hz. The 1.4" compression driver fires through the center of the woofer and is acoustically mated to the woofer for a smooth transition at crossover. The system achieves 90 degree axisymmetric coverage.