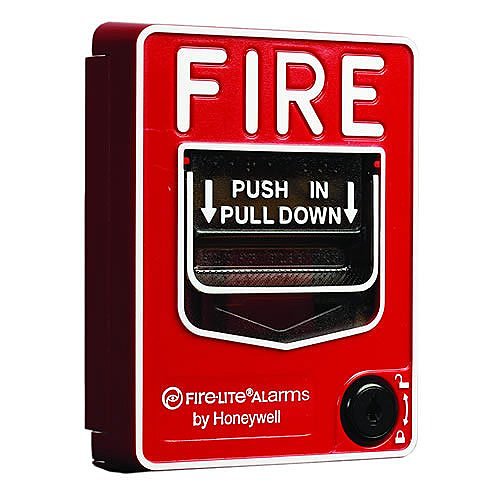 The FireLite® SWIFT® addressable pull station is a dual-action, manual pull station with a key-lock reset feature that provides one addressable alarm initiating input. The pull station features similar aesthetic design and durable construction characteristics as the wired counterpart to blend seamlessly throughout the environment. The device communicates to the FACP through the SWIFT mesh network and gateway, and is powered by 4 batteries offering a 2- year, UL listed battery life.

Installation is fast and straightforward by using a mounting plate that can be surface mounted. Once the mounting plate is firmly attached to the wall, the pull station is snapped into place and locked down with 3 screws.

The mechanical operation is simple and easy to use in an emergency with a PUSH IN/PULL DOWN handle that latches in the down position to clearly indicate the station has been operated while the word "ACTIVATED" appears on top of the handle in bright yellow, further indicating the operation of the station.

The SWIFT wireless system offers intelligent (addressable) devices which provide secure, reliable communication to the Fire Alarm Control Panel (FACP) across a Class A mesh network. Wireless devices create an opportunity for applications where it is costly (concrete walls/ceilings, buried wires), obtrusive (surface mount conduit), or possibly dangerous (asbestos) to use traditional wired devices. In addition, both wired and wireless devices can be present on the same FACP providing an integrated wired-wireless solution for increased installation potential.

The mesh network within the SWIFT system creates a child-parent relationship between the devices so that each device has two parents providing a second path for communications on every device. If one device can no longer operate for any reason, the rest of the devices can still communicate with each other, directly or through one or more intermediate devices. Once an initial mesh network is formed, mesh restructuring automatically occurs to find the strongest paths possible within the network.

The SWIFT system also engages frequency hopping to prevent system interference whether intentional or accidental. Each device complies with part 15 of the FCC rules meaning operation is subject to the following two conditions: 1) The device may not cause harmful interference and 2) The device must accept any interference received including interference that may cause undesired operation.